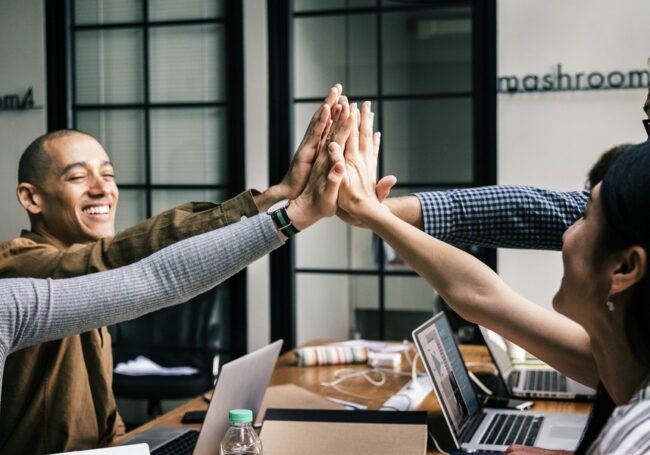 In this blog we look at one of our favourite models for understanding the phases that teams go through to achieve high performance. We believe it’s a rite of passage that will happen naturally but if managed well can really shift teams from new to high performing faster. We cover how to handle conflict in teams here. But this blog is about the phases that leaders must facilitate to build high performing teams. You’ll note the word facilitate. It’s a journey for all team members. The Tuckman model, also known as the Tuckman Stages of Group Development is widely known, yet often underutilised. Here’s our take on it:

Forming: The start of something new. A group working together towards a new common goal or with a new team member creates a new dynamic. Everyone is polite. ‘You go first, no you, really….’ A level of uncertainty about who does what, when and with whom emerges. It could be a new venture or a re-structured team, or even a new phase. It’s where the team or partnership first join, or first need to achieve something together and the theory’s clear but the implementation has yet to take shape. The leader must establish purpose, clarity and facilitate new relationships. There’s more to this than simply getting the tasks agreed and the project started.

Storming: Decisions are being made. Some popular, some not so. Team members establish themselves in their new roles and start to get in each other’s way as they attempt to deliver their goals. Opinions are forming and starting to be expressed. Interpretations are made about actions. Difficult questions begin to surface. Reality shows up the unforeseen parts of the plan. There’s no need for drama, but there is a need to discuss the conflicts arising or bubbling under the surface. Emotions are higher now as people are more invested in achieving their goals so this is the stage where the power struggles start that turn into team dysfunction (if the leader allows it). Is the leader strong enough to draw out the differences in styles, operating models and personalities, confront it and take constructive steps to find a way forward? If yes, great! The journey continues. If not, this is where the team stays until it is openly discussed, otherwise either the project fails or nothing changes until someone leaves.

Norming: As the team begin to bond, trust builds. They have disagreed before and survived it. In fact, they now have an enhanced understanding of each other, a greater appreciation of their contribution to the team as individuals and of their fellow team members and they start to use this to build on. Collaboration becomes evident, respect is present, including in disagreement. Opposing views are given credence, assessed for usefulness and roles and responsibilities are accepted. Decisions become easier and implementation smoother. They’re on their way to high performance. Complacency by any team member at this phase must be noticed and averted or addressed if the journey is to continue successfully.

Performing: Now the team are working together well. They have a shared vision, they understand their purpose and values. They don’t agree on everything and it’s ok. They’ve learned to manage conflict. The leader has little to do now to manage differences as the individuals can do that for themselves, with each other. They deliver, time and time again. At this stage, the team is mature, highly adaptive, creative and has formed strong relationships thanks to their shared journey.

The team are performing not because they averted conflict, changes of plan and uncertainty, but because they embraced it and found a way through it. Now when there is a change, transitions from forming through to high performing can happen faster with fewer bumps along the way. Important issues are faced and dealt with. The intellectual and emotional capital of that team, wherever those team members go next, goes with them. If these people stay in the organisation, the effect on the teams they go to is multiplied as they become stronger at working with different people in different ways.

There is a fifth stage that Tuckman identified. Mourning. This is where a key team member, not necessarily the leader, but it will apply here too, leaves the team. Before they are able to re-form, there is period of natural affect as the team go through experiencing the loss of this significant character. Here, the natural change process is important to acknowledge, but that’s another topic we can cover another time!

Ultimately, how the leader in a team facilitates the journey from forming to high performing is instrumental in their success. If the leader can detach enough to manage the conflict issues and engage enough with their people to guide the team through each phase fully and be aware enough to notice and adjust as they need to about their own impact during the journey, they can reach the ‘performing’ stage and become a productive and effective team much quicker. And while this cycle might be repeated when someone new joins the team or someone leaves, a good leader will be able to navigate their team through each phase and make them stronger for it.

If you could use some support to find out what works for your team, we’d love to hear from you. For a no obligation discussion, get in touch, and we can arrange an initial discussion to start exploring which blend of traditional and bespoke models might work for you.